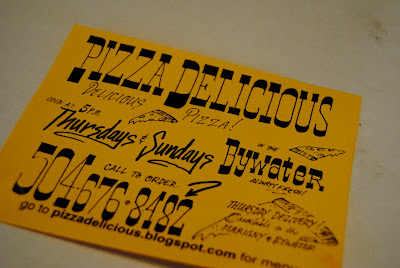 Last night Nick and I had our first Pizza Delicious experience and it was ah-maze-ing! For those of you unfamiliar Pizza Delicious is a small, 2-oven operation in the Bywater neighborhood of New Orleans. It's a bit of an underground sensation with a cult following. Pizzas are available every Thursday and Sunday for carryout only (unless you live in the Bywater or Marigny - then they'll deliver to you). They make cheese, margherita, and pepperoni pizzas each night, but also feature 2 specialty pizzas, usually a meaty option and a vegetarian option. The Pizza Delicious faithful consult "The Blog" typically the day before to scope out the menu. Then, on the appointed day the phone lines open at noon and thus begins the ordering process. The doors open at 5 p.m. and they'll assign staggered pick-up times to callers as the orders come in. It's always better to call earlier, rather than later. Sometimes ingredients tend to run out. And, sometimes worse still, dough runs out and you're left with no pizza at all. 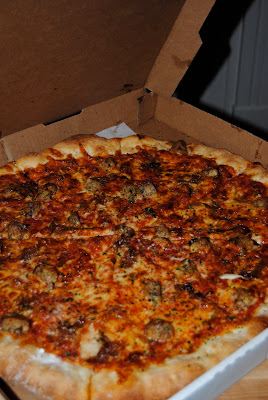 One of the specials last night was a homemade meatball pie with an option to add caramelized onions (who wouldn't want to add that?). We went for it all and it didn't disappoint. The sauce had a rich, tomatoey essence and the meatballs were tender and full of flavor. The caramelized onions added the perfect sweet surprise that capped off the whole experience. It was hands-down the best pizza I've had in a really long time (sorry, Fleur de Lis).  We have already begun stalking their blog to see what wonderful creations await us on Thursday. 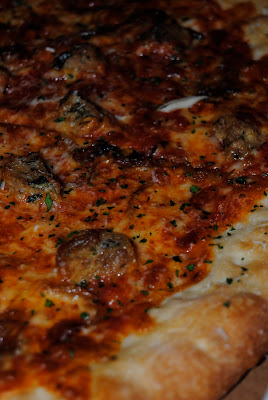 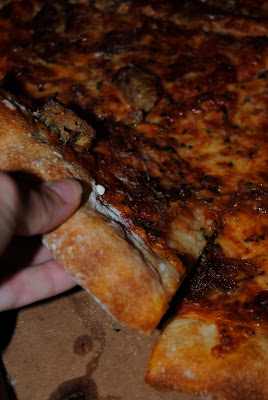 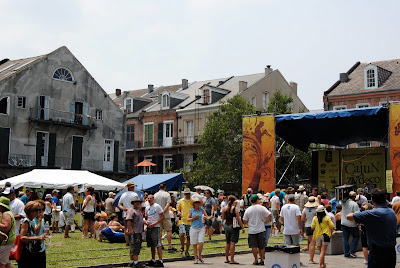 Louisiana festival season is in full swing and this past weekend we took in the sights, sounds, and tastes of the Vieux To Do, three amazing festivals all rolled into one. First, it was the Creole Tomato Festival, followed by the Louisiana Seafood Festival, capped off by the Cajun-Zydeco Music Festival. Though it was brutally hot (antonym for joy), we tried to stay cool by keeping the Abita beer tent in business and snacking on the amazing blueberry basil sorbetto from la Divina Gelateria. 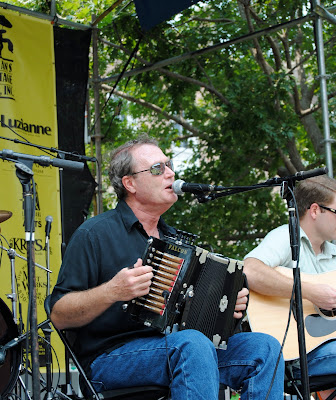 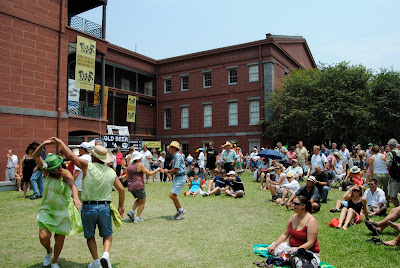 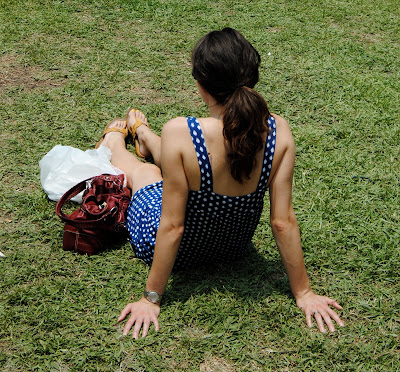 It was so hot we didn't eat much, but the fresh produce and heirloom tomatoes from Covey Rise Farms were so beautiful we couldn't help, but relish in all the bright colors and endless recipe possibilities. 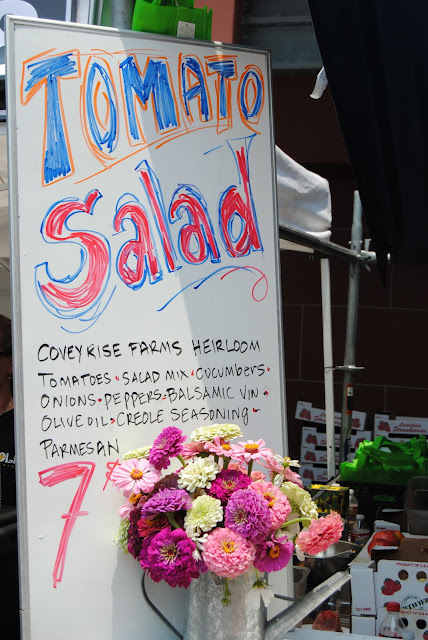 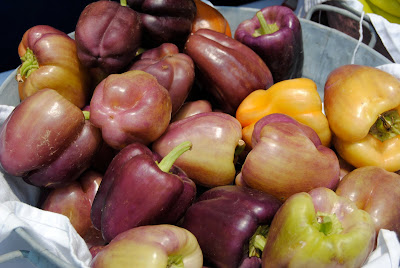 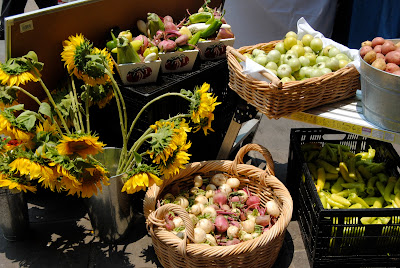 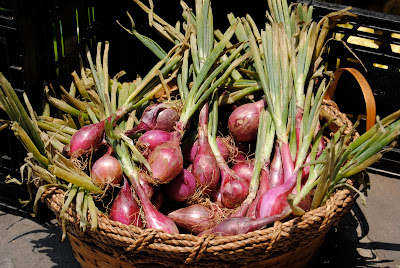 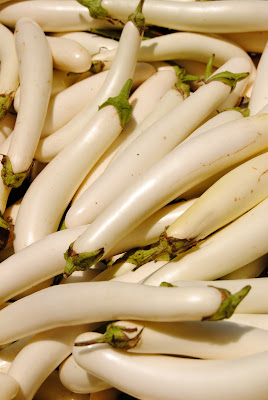 So, we've finally made the move to New Orleans. It only took one year, one week, and three days to sell our home in Baton Rouge, but who's counting? No more long commutes, no more Metairie traffic, no more idiots stopping on the spillway to gawk at the river rushing into the lake (it's just water, people). This is home. And, will be for awhile.

School's ended and I have my summer to explore, write, be creative. I think the city will be good for me. I'm already inspired on an hourly basis and feel like a child walking through my new Faubourg St. John neighborhood. My head is on a complete swivel and I can't take it all in fast enough. The other morning I was inspired to go walking, and brought my camera along to capture some snaps of this beautiful place. 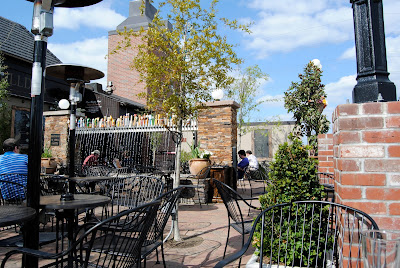 Happy vernal equinox, ya'll! The first day of spring is officially here and as much as I love bundling up to sit around a roaring outdoor fire sipping hot toddies with friends, I equally love shedding those layers for the feel of the sun on my bare shoulders while sipping a cold beer. So, with spring's arrival and blue skies everywhere patio drinking and sundresses are on my mind. All, you need is the perfect patio bar. My fave: The Bulldog, south Louisiana's patio bar utopia. It's dog friendly and the beer is always cold. 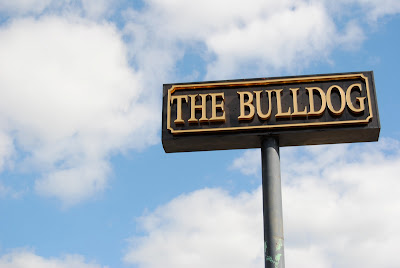 In Louisiana, spring means the return of Abita Strawberry Harvest Lager and with only 99,000 cases made this year you should enjoy it as soon and as often as possible (which I fully intend to do). When that glorious juice runs out you won’t be able to enjoy it until next spring (frowny face). I've also recently become obsessed with Magic Hat #9, a slightly sweet, not-so-pale ale. This beer is truly special. I discovered a haiku written about it on the brewery's website:

Sweet Nine, Number Nine
A welcome burst of flavor
Tongue tastes spring's first bloom
Poetic genius, if you ask me. Any beer worthy of poetry is worthy of my palate. 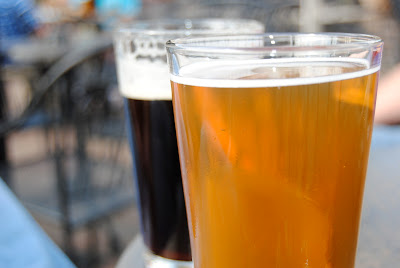 So, needless to say I plan to fill my weekends with taste-testing brews, sunning, and laughing with friends. Beinvenue spring! 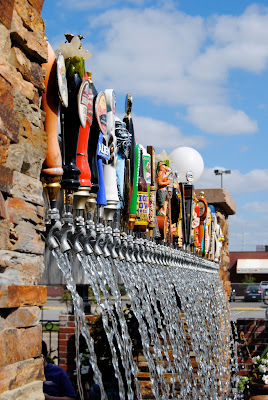 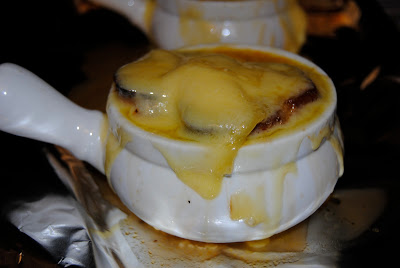 I suppose caramelizing onions for five hours seems a little crazy, maybe almost obsessive, but when the fruits of your labors yield a rich, brothy, oniony (pretty sure that's not a word) concoction beneath a mound of toasted bread and melting cheese, I think this is where the lines between crazy and genius start to blur. With an overflowing bookcase of cookbooks I had my pick of fabulous recipes by any number of celebrated chefs, but for French onion soup there was only one: Thomas Keller.
I first fell in love with Thomas Keller after eating his mussels and scallops at Bouchon in Las Vegas. I knew it was true love after making his buttermilk fried chicken from Ad Hoc, his newest restaurant venture proclaiming simply to be "for temporary relief from hunger." Pretty sure that with fig-stuffed roast pork loin and leek bread pudding on the menu it offers something more closely in line with pure bliss, than temporary relief.

But, back to onion soup. As with most things worth savoring, sweating the details in preparation will pay off dividends and your palate and stomach will thank you. With Thomas Keller, however, it tends to go beyond just sweating the details, particularly when the Bouchon cookbook has two whole pages dedicated simply to "The Importance of Onion Soup" and sidebars on the versatility of onions and the necessity to serve in the proper vessel (apparently without the proper bowl the ratio of broth, onions, cheese, and croutons will be out of sync). Needless to say that last bit scared me into running immediately out to World Market to fetch the perfect little crocks.

With two paragraphs describing the perfect way to slice the onions (all eight pounds of them) so that they are uniform and caramelize evenly, I was a little nervous before I'd even begun, but once I got the hang of it (and had a couple glasses of wine), I tore through all eight pounds in no time. The perfectly sliced onion strings almost didn't fit in my Dutch oven, but quickly began to reduce down and alleviate any fears that I would not be able to fit another ingredient in the pot. 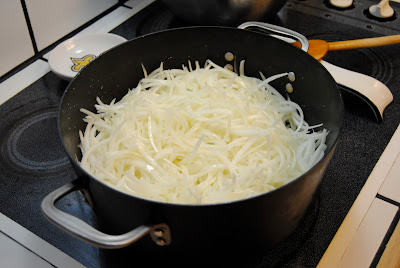 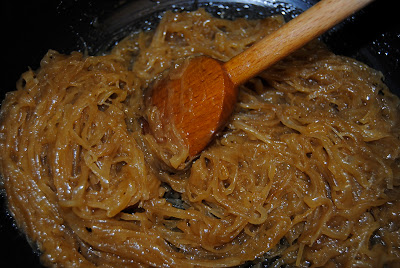 With a bevy of classics and French films in my DVD collection, thus began my marathon of stirring the onions every 15 minutes in between viewings of Amelie and Paris When it Sizzles. By the end of it I was left with a glorious (surprisingly small) mound of golden onions to which I added a sachet of bay, peppercorns, and thyme, along with the broth (unfortunately not homemade, but can you blame me after stirring onions for five hours?). After an hour simmering in the broth the end was in sight. I added toasted baguette and aged Comte to create that delicious bubbling crust. And, we dug in. Thomas Keller's attention to detail was so worth it. C'est magnifique! 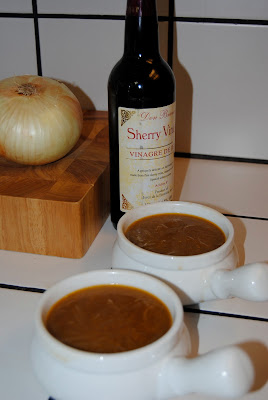 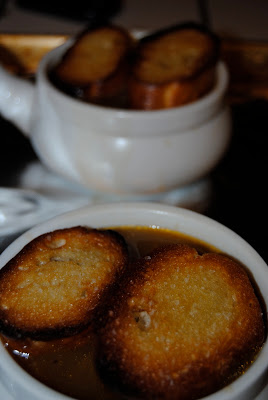 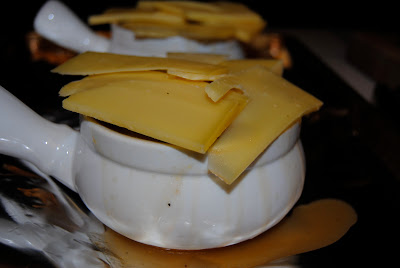 Sarah
a mildly eccentric modern girl with a lust for life, a passion for the old fashioned, a love of literature, a zeal for cooking, and a slave to fashion.